This piece in the Wall Street Journal takes a stroll through the history of punctuation marks and looks at how they have evolved – or in some cases become extinct – as the usage and culture of language, and even its platforms, have changed.

Is This the Future of Punctuation!?

On the misuse of apostrophe’s (did your eye just twitch?) and our increasingly rhetorical language

Punctuation arouses strong feelings. You have probably come across the pen-wielding vigilantes who skulk around defacing movie posters and amending handwritten signs that advertise “Rest Room’s” or “Puppy’s For Sale.”

People fuss about punctuation not only because it clarifies meaning but also because its neglect appears to reflect wider social decline. And while the big social battles seem intractable, smaller battles over the use of the apostrophe feel like they can be won. 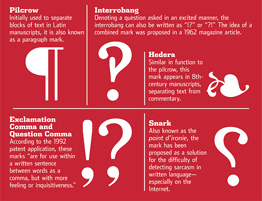 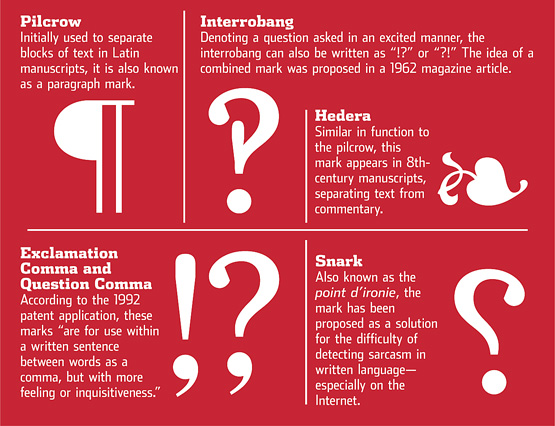 Yet the status of this and other cherished marks has long been precarious. The story of punctuation is one of comings and goings.

Early manuscripts had no punctuation at all, and those from the medieval period suggest haphazard innovation, with more than 30 different marks. The modern repertoire of punctuation emerged as printers in the 15th and 16th centuries strove to limit this miscellany.

Many punctuation marks are less venerable than we might imagine. Parentheses were first used around 1500, having been observed by English writers and printers in Italian books. Commas were not employed until the 16th century; in early printed books in English one sees a virgule (a slash like this /), which the comma replaced around 1520.

Other marks enjoyed briefer success. There used to be a clunky paragraph sign known as a pilcrow ; initially it was a C with a slash drawn through it. Similar in its effect was one of the oldest punctuation symbols, a horizontal ivy leaf called a hedera . It appears in 8th-century manuscripts, separating text from commentary, and after a period out of fashion it made an unexpected return in early printed books. Then it faded from view.

Another mark, now obscure, is the point d’ironie, sometimes known as a “snark.” A back-to-front question mark, it was deployed by the 16th-century printer Henry Denham to signal rhetorical questions, and in 1899 the French poet Alcanter de Brahm suggested reviving it. More recently, the difficulty of detecting irony and sarcasm in electronic communication has prompted fresh calls for a revival of the point d’ironie. But the chances are slim that it will make a comeback.

In fact, Internet culture generally favors a lighter, more informal style of punctuation. True, emoticons have sprung up to convey nuances of mood and tone. Moreover, typing makes it easy to amplify punctuation: splattering 20 exclamation marks on a page, or using multiple question marks to signify theatrical incredulity. But, overall, punctuation is being renounced.

How might punctuation now evolve? The dystopian view is that it will vanish. I find this conceivable, though not likely. But we can see harbingers of such change: editorial austerity with commas, the newsroom preference for the period over all other marks, and the taste for visual crispness.

Though it is not unusual to hear calls for new punctuation, the marks proposed tend to cannibalize existing ones. In this vein, you may have encountered the interrobang , which signals excited disbelief.

Such marks are symptoms of an increasing tendency to punctuate for rhetorical rather than grammatical effect. Instead of presenting syntactical and logical relationships, punctuation reproduces the patterns of speech.

One manifestation of this is the advance of the dash. It imitates the jagged urgency of conversation, in which we change direction sharply and with punch. Dashes became common only in the 18th century. Their appeal is visual, their shape dramatic. That’s what a modern, talky style of writing seems to demand.

By contrast, use of the semicolon is dwindling. Although colons were common as early as the 14th century, the semicolon was rare in English books before the 17th century. It has always been regarded as a useful hybrid—a separator that’s also a connector—but it’s a trinket beloved of people who want to show that they went to the right school.

More surprising is the eclipse of the hyphen. Traditionally, it has been used to link two halves of a compound noun and has suggested that a new coinage is on probation. But now the noun is split (fig leaf, hobby horse) or rendered without a hyphen (crybaby, bumblebee). It may be that the hyphen’s last outpost will be in emoticons, where it plays a leading role.

Graphic designers, who favor an uncluttered aesthetic, dislike hyphens. They are also partly responsible for the disappearance of the apostrophe. This little squiggle first appeared in an English text in 1559. Its use has never been completely stable, and today confusion leads to the overcompensation that we see in those handwritten signs. The alternative is not to use apostrophes at all—an act of pragmatism easily mistaken for ignorance.

Defenders of the apostrophe insist that it minimizes ambiguity, but there are few situations in which its omission can lead to real misunderstanding.

The apostrophe is mainly a device for the eye, not the ear. And while I plan to keep handling apostrophes in accordance with the principles I was shown as a child, I am confident that they will either disappear or be reduced to little baubles of orthographic bling.

—Mr. Hitchings’s latest book. “The Language Wars: A History of Proper English,” will be published in November.