A piece by my friend Damian Fowler on the BBC News online magazine. 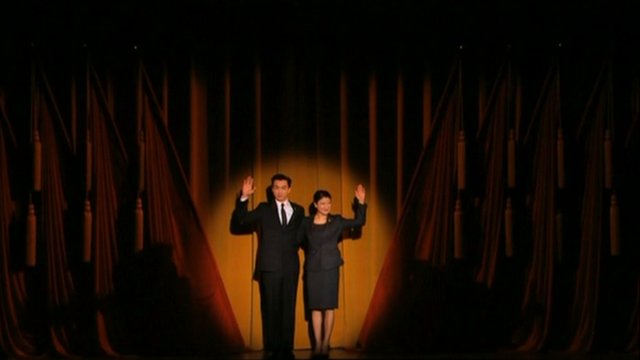 Chinglish tells the story of a struggling American businessman trying to win a Chinese business contract, with amusing consequences

A new play is bringing to light what is lost in translation between residents of China and the English-speaking world. Damian Fowler finds out just how art imitates life.

Mandarin has arrived on the Broadway stage thanks to a new play called Chinglish, which explores the communication gap between the English-speaking world and China. It is a bilingual play, written in a mix of English and Mandarin, surely a first in the history of Broadway. 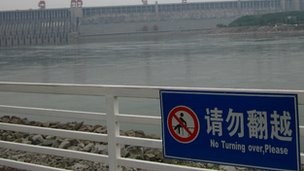 Written by the playwright David Henry Hwang, Chinglish is a comedy with a ripped-from-the-headlines theme. It tells the story of a struggling American businessman who finds himself in a provincial city in China, trying to win a contract to make signs for public buildings.

The play explores the language barrier that separates the businessman from his Chinese counterparts who can make or break the deal.

Hwang, a Chinese-American who does not speak Chinese, felt inspired to write the play after his own business trips to China.

“I’ve been going to China a fair amount over the last five or six years, mostly because China has become interested in Broadway musicals and I happen to be the only nominally Chinese who’s ever written a Broadway show,” says Hwang, referring to his play M Butterfly, which won him a Tony Award in 1988.

In China he could not help but notice the “absurdly translated signs” of Chinese into English – otherwise known as Chinglish.

Naively literal, the signs garble English into hilariously strange phrases: one, outside a bathroom for disabled people read as “Deformed Man’s Toilet”.

Other examples were equally baffling:

But the miscommunication between cultures runs deeper than words, says Mr Hwang.

“Chinglish is about attempts to communicate across cultures and the barriers that separate us, and the most superficial of those is language.

“But then sometimes even if you’re speaking the words literally you may as well be speaking a different language because some of the underlying cultural assumptions are so different.”

Admiration and anxietyOf the seven people in the cast, six are bilingual, either Chinese or Chinese-American actors.

Actress Jennifer Lim plays Xi Yan, a fierce local official who holds the keys to the American’s deal. For her, Chinglish is a truly cross-cultural play. 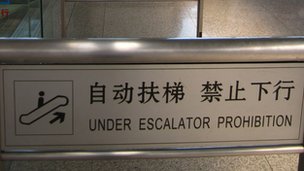 An example of Chinglish in the Shenyang airport

“Growing up I found myself in numerous situations where I’ve had to translate for relatives,” says Lim, who was born in Hong Kong and then educated in Britain and the United States.

“If you speak the Chinese language the Chinglish makes a lot of sense!”

British actor Stephen Pucci, who speaks both English and Mandarin, plays a shady British expat who tries to broker the deal. Pucci has watched the rise of China as a global power with fascination, and admires the play’s topical themes.

“I think it’s definitely going to tap into something and encourage mutual awareness and understanding,” he says. “Whether that understanding will be completely and wholly mutual we will see.”

Chinglish opens at a moment in history when two important world powers, the US and China, are observing each other warily – there is admiration and anxiety on both sides.

“There are expansive differences between Chinese and American culture,” says Leigh Silverman, the director of Chinglish. “It’s essential that we figure out how to contend with each other and I think that’s a part of what the play is exploring.”

Last year, Silverman traveled with Hwang and the play’s producers to Guizhou, a city of four million in south-western China, where the play is set. They were chaperoned by husband-and-wife cultural advisers, Joanna Lee and Ken Smith, who set up business meetings, dinner dates and tours for the creative team.

In addition, the duo helped find original props for the play to make it as authentic as possible. For example, they brought in the framed calligraphy which adorns the stage – including a banner featured in a restaurant scene reading: “Good eating and drinking means good morals.”

Cultural blundersMr Smith and Ms Lee run Museworks, a consultancy connecting performing arts professionals between America, Europe and Asia. They understand the complications of doing business in China and have saved many a business professional from making cultural blunders.

“How do they navigate? How do they find their hotel room, get the support on the ground to get their deal done?”

One of the most important principles to understand when doing business in China is the concept of “guanxi” – pronounced “gwanshee” – which refers to the system of social networks and influential relationships that can facilitate business and other dealings.

“When you talk about guanxi in business it really talks about people you know in advance who have the same goals, same ideals and same way of working as you,” says Mr Smith.

Guanxi even supersedes the significance of the business contract in China, according to the pair.

So, a Westerner doing business in China should expect to spend a lot of time wining and dining their Chinese counterparts to get the deal done. “Once one deal comes through and it’s successful, people tend to stick together. The guanxi continues and strengthens,” says Ms Lee.

In this regard Chinglish and its take on contemporary China is very much of the moment.

That does not mean it is without risk. After all, “Penetration will be dealt with painfully” can really mean “Trespassers will be prosecuted”.